One of the most memorable curries I have ever had was in Bradford, having played a game of football in appalling conditions.

Rain poured down the windows of the curryhouse as condensation trickled inside. Not that I care – I had scored at least three (old footballers are a billion times worse than fishermen when it comes to exaggeration) – and the most fabulous curry was in a giant pot.

The staff had it slow cooked overnight from scraps of meat and bits of bone they had on hand, and about 30 of us – both teams and all the large crowd we had attracted – dived into it.

So when I spotted ‘staff meat curry’ on the menu of Darlington’s new curryhouse, Arvelli in Northgate, I knew what I had to try.

Arvelli opened in late November in a crowded marketplace in a former Indian restaurant next to the popular Eastern Bamboo. It can accommodate 80 people, but it has been converted into a dining room with its large interior comfortably divided into intimate bays.

Arvelli – which apparently means “your destiny” – has a few nice touches that set it apart from other Indians in town. The first thing that really struck me was that the menu was not on a scuffed piece of paper, but in the form of a 12 page cloth bound book.

The book contains all the traditional curries – bhuna, tikka, dansak, masala – which are made from vegan bases, as well as many others which were new to me: satkora, for example, being a medium curry cooked in a citrus Bangladeshi. Starters are usually around £5.50, while most main courses are a few cents less than a dozen. Takeaways are cheaper by a pound.

Petra, my wife and I started with a fresh and crispy poppadum, accompanied by a nice platter of pickles and a very nice tomato and onion salad. 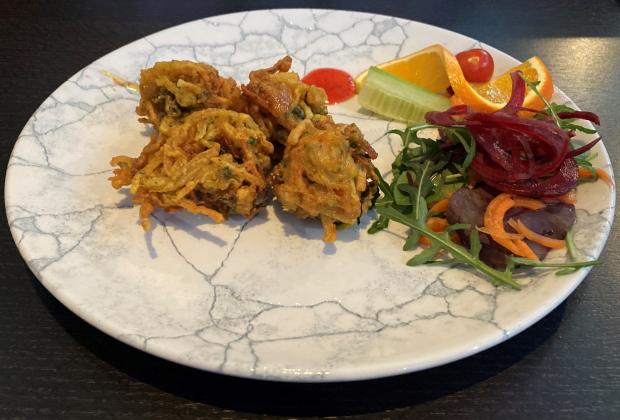 To start, Petra had the Sabji Pakora (£3.95) (above), which was pieces of cauliflower, eggplant, and potatoes fried in batter. They were light, crispy and tasty.

I opted for the Mach Tandoori (£5.50) (above), which was a small white fish – a tilapia – coated in the orange tandoori marinade. It must be the Indian equivalent of whitebait: fishy enough without being too fishy and here we gave it a little taste of tandoori. I really like that.

Both entrees were served with artful salads with beetroot spirals and orange twists amongst the lettuce. 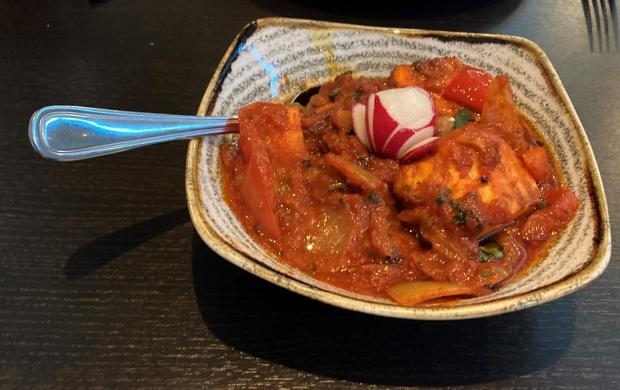 For her main course, Petra had the Karai Salmon (£9.95) (above), which was a wok-cooked tenderloin with a tomato sauce consisting of garlic, chili peppers and onions. She found it very good. It was a little warmer than she had expected, but the salmon was still glistening.

I of course had the “staff meat curry” (£13.95) (above, with a side of spinach bhaji) which was lamb on a variety of bones – a traditional Bangladeshi dish. The lamb had been slow cooked for hours so it fell off the bone. The dish was quite warm – like a jalfrezi, which gives me pleasant beads of sweat around my head – and the sauce was golden and soft so as not to overshadow the lamb. After all these years, I have no idea how it compares to Bradford’s staff meat curry, but it was a smart, skillfully managed combination.

We accompanied our mains with a mushroom rice bowl (£3.75), garlic nan (£3.25) and saag bhaji (£4.25) – a dish spinach side dish. The flesh of my meat curry really benefited from the green spinach touch, and I finished the batch, wiping the beads off my head with a welcome hot towel.

Petra couldn’t handle all of her salmon and as we admired another table’s spectacular thali – a compartmentalized circular dish of five different curries – she spotted the staff happily wrapping up their leftovers. Therefore, the salmon came home to us in a doggy bag.

The bill for two including drinks was £63.15. Service was friendly and chatty, taking pains to explain some of the odd sounding dishes on the menu. Arvelli can stand out in Darlington’s crowded curry market because it was a memorable meal on its own terms.